I recently sat down for a Q&A with Pittwater Life, a local magazine delivered to Pittwater residents in Sydney, to talk about my book. Great to see the article this month! 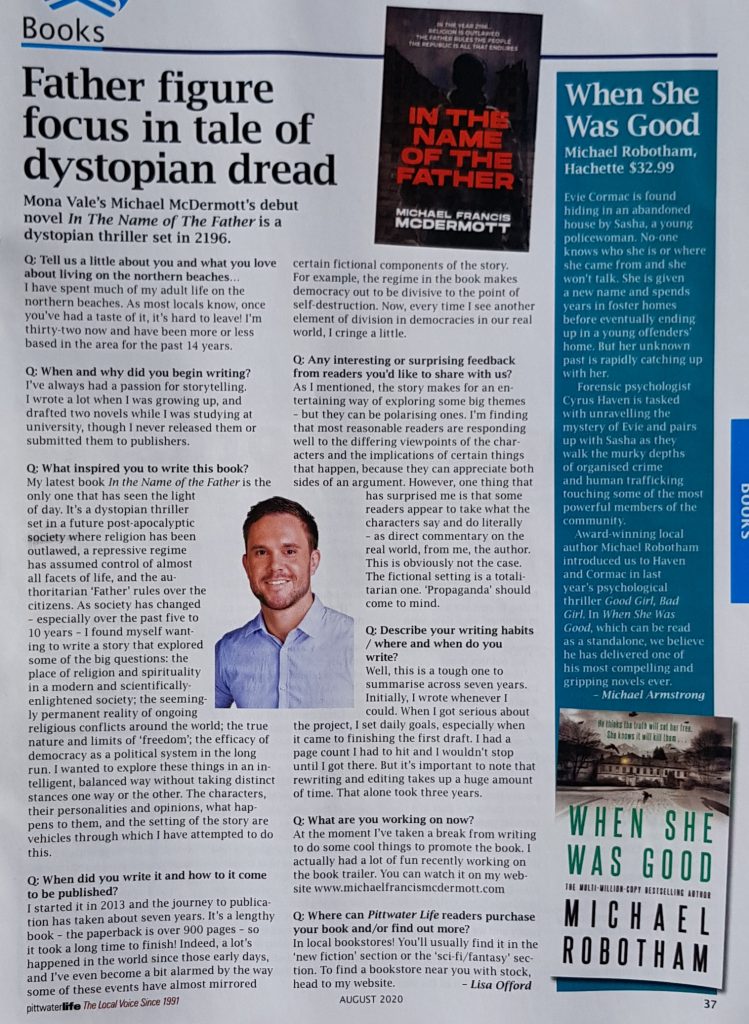 Here is the article in full:

Mona Vale’s Michael McDermott’s debut novel In the Name of the Father is a dystopian thriller set in 2196.

Q: Tell us a little about you and what you love about living on the northern beaches…

I have spent much of my adult life on the northern beaches. As most locals know, once you’ve had a taste of it, it’s hard to leave! I’m thirty-two now and have been more or less based in the area for the past 14 years.

Q: When and why did you begin writing?

I’ve always had a passion for storytelling. I wrote a lot when I was growing up, and drafted two novels while I was studying at university, though I never released them or sent them to publishers.

Q: What inspired you to write this book?

My latest book, In the Name of the Father, is the only one that has seen the light of day. It’s a dystopian thriller set in a future post-apocalyptic society where religion has been outlawed, a repressive regime has assumed control of almost all facets of life, and the authoritarian ‘Father’ rules over the citizens. As society has changed – especially over the last five to ten years – I found myself wanting to write a story that explored some of the big questions: the place of religion and spirituality in a modern and scientifically-enlightened society; the seemingly permanent reality of ongoing religious conflicts around the world; the true nature and limits of ‘freedom’; the efficacy of democracy as a political system in the long run. I wanted to explore these things in an intelligent, balanced way without taking distinct stances one way or the other. The characters, their personalities and opinions, what happens to them, and the setting of the story are vehicles through which I have attempted to do this.

Q: When did you write it and how did it come to be published?

I started it in 2013 and the journey to publication has taken about seven years. It’s a lengthy book – the paperback is over 900 pages – so it took a long time to finish! Indeed, a lot’s happened in the world since those early days, and I’ve even become a bit alarmed by the way some of these events have almost mirrored certain fictional components of the story. For example, the regime in the book makes democracy out to be divisive to the point of self-destruction. Now, every time I see another element of division in democracies in our real world, I cringe a little.

As I mentioned, the story makes for an entertaining way of exploring some big themes – but they can be polarising ones. I’m finding that most reasonable readers are responding well to the differing viewpoints of the characters and the implications of certain things that happen, because they can appreciate both sides of an argument. However, one thing that has surprised me is that some readers appear to take what the characters say and do literally – as direct commentary on the real world, from me, the author. This is obviously not the case. The fictional setting is a totalitarian one. ‘Propaganda’ should come to mind.

Q: Describe your writing habits / where and when do you write?

Well, this is a tough one to summarise across seven years. Initially, I wrote whenever I could. When I got serious about the project, I set daily goals, especially when it came to finishing the first draft. I had a page count I had to hit and I wouldn’t stop until I got there. But it’s important to note that rewriting and editing takes up a huge amount of time. That alone took three years.

Q: What are you working on now?

At the moment I’ve taken a break from writing to do some cool things to promote the book. I actually had a lot of fun recently working on the book trailer. You can watch it on my website www.michaelfrancismcdermott.com

Q: Where can Pittwater Life readers purchase your book and/or find out more?

In local bookstores! You’ll usually find it in the ‘new fiction’ section or the ‘sci-fi/fantasy’ section. To find a bookstore near you with stock, head to my website.